Review: Quorn vs chicken, calories and nutritional values – can it sway a bodybuilding meat lover?

You are here: Home / Blog / Diet / Review: Quorn vs chicken, calories and nutritional values – can it...

Alright, alright don’t even start with the meat lover puns.

Since my cutting diet came to a conclusion I’ve been spending a lot of time reading, researching and generally pooling together ideas on how I want to construct a healthy, happy relationship with food going forwards. But I as an amateur bodybuilder I also want to make sure I’m getting some good sources of protein in there.

It’s no secret that veganism and vegetarianism is becoming increasingly popular as meat and the meat industry become the next food industry “demon”. So it cropped up in a lot of the information I was investigating and so I thought it only fair to see what possibilities vegetarianism may hold for me. A fair few vegan and vegetarian bodybuilders have also sprung to the limelight recently too, so may be they are on to something!

I have an ongoing life-long love affair with red meat but I also LOVE trying new foods. It dawned on me that to my knowledge I’ve never knowingly had Quorn so it seemed like a good place to start.

Quorn isn’t a new product to market as you no doubt already know, and it comes in many forms; mince, pieces, sausages, burgers so there is plenty to choose from. For the purposes of this review I’ve chosen to give the Quorn pieces a go.

The table below gives a quick comparison of the nutritional values of Quorn and chicken: 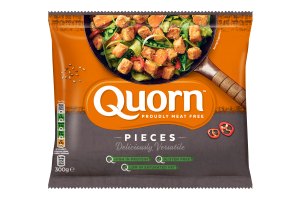 From a nutritional perspective it’s definitely not a like-for-like swap but I do think the macro profile means Quorn can be easily slotted in to a diet plan with a bit of jiggling around.

You can get slightly more volume for your calories with Quorn than with chicken. As a short arss my maintenance calories are low so more volume is definitely a good thing for me!

Quorn is a fungus based product grown from fermentation – which let’s be honest doesn’t make it sound glamorous nor appetising!

However, I find the texture OK, it feels like a mushroom or aubergine texture to me, it’s not quite meaty – but it does have some firmness to it.

The smell is faint, I personally find it doesn’t smell of much at all. As someone who works in an office I feel like this might be marginally more acceptable the popping open a Tupperware of cooked chicken – which quite frankly smells awful and we know it!

The taste is relatively bland, which I also think is a good thing. I feel like this product most likely works best with sauce and seasonings as opposed to a stand alone part of a meal though.

I may incorporate Quorn in to some of meals, out of convenience as much as anything, and as a change from sourcing my protein purely from meats.

So yes, I would use again, but I’m definitely not swearing off meat any time soon!

This site uses cookies. By continuing to browse the site, you are agreeing to our use of cookies.

We may request cookies to be set on your device. We use cookies to let us know when you visit our websites, how you interact with us, to enrich your user experience, and to customize your relationship with our website.

Click on the different category headings to find out more. You can also change some of your preferences. Note that blocking some types of cookies may impact your experience on our websites and the services we are able to offer.

These cookies are strictly necessary to provide you with services available through our website and to use some of its features.

Because these cookies are strictly necessary to deliver the website, refuseing them will have impact how our site functions. You always can block or delete cookies by changing your browser settings and force blocking all cookies on this website. But this will always prompt you to accept/refuse cookies when revisiting our site.

We fully respect if you want to refuse cookies but to avoid asking you again and again kindly allow us to store a cookie for that. You are free to opt out any time or opt in for other cookies to get a better experience. If you refuse cookies we will remove all set cookies in our domain.

We provide you with a list of stored cookies on your computer in our domain so you can check what we stored. Due to security reasons we are not able to show or modify cookies from other domains. You can check these in your browser security settings.

These cookies collect information that is used either in aggregate form to help us understand how our website is being used or how effective our marketing campaigns are, or to help us customize our website and application for you in order to enhance your experience.

If you do not want that we track your visit to our site you can disable tracking in your browser here:

We also use different external services like Google Webfonts, Google Maps, and external Video providers. Since these providers may collect personal data like your IP address we allow you to block them here. Please be aware that this might heavily reduce the functionality and appearance of our site. Changes will take effect once you reload the page.

The following cookies are also needed - You can choose if you want to allow them: